How does the perception of time originate and endure as a presence in our minds? This question can be examined through language, which appears to register our time-perception in every one of its manifestations. In order to investigate this question, it was proposed that models be constructed of neural networks to output possible temporal ordering of events. The models of artificial neural networks (ANNs) are planed, constructed and analyzed by a team of researchers from linguistics, philosophy and engineering. Works for the models of the ANNs include creation of target corpora (Asahara), linguistic analyses of time expressions (Shimada), philosophical analyses of the time expressions (Aoyama), and network construction using deep-learning protocols (Kobayashi). The construction of ANNs may provide insights into how temporal meaning is processed in the brain. The constructed ANNs will then be used by other teams. By collaborating with B01, C01 and E01 teams, our team will make efforts to elucidate the time consciousness of humans holding in the brain by clarifying the correspondent relationship between the expression of the middle layers and the brain activity data. In addition, in cooperation with D01, artificial neural circuits will be constructed from children's speech data to estimate changes in time consciousness and the neurological development of the brain.

Neural Bases for the Flow of Time 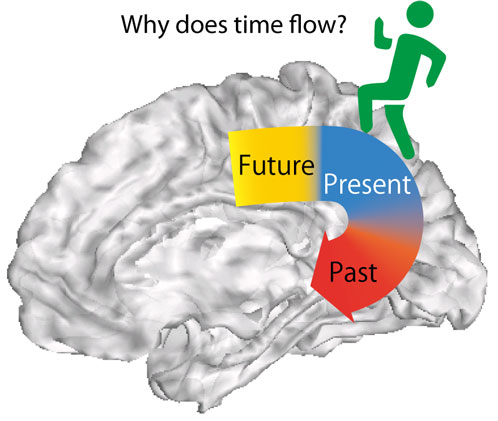 In our preceding project, "The Science of Mental Time", we successfully drew a map of mental time over the medial surface of the cerebral cortex. In this sub-research project of "flow" (B01), we focus brain regions around the precuneus implicated for representing the mental present, and elucidate neural bases that support the sense of time flow through the future, the present, and the past. We record neural activity from the brains of the humans and monkeys, and compare these actual activities with those of the artificial neural network that will be provided by the sub-group of "generate" (A01). Based on these analyses, we elucidate neural bases that discriminate between the past, the present, and the future and generate a flow across them in the level of neuronal activities to the level of hierarchical architectures. Further, we test a hypothesis that the speed of time flow around the precuneus is directly connected with our daily sense of time flow. We further expect that elucidation of neural bases for time perception in and around the precuneus would contribute to clarifying the pathophysiology of dementia because the amyloid starts to accumulate in the region before the clinical onset of Alzheimer's disease (collaboration with sub-project E01 "collapse").
C01

Mechanism and Manipulation of Mental Time Associated with Perception and Action 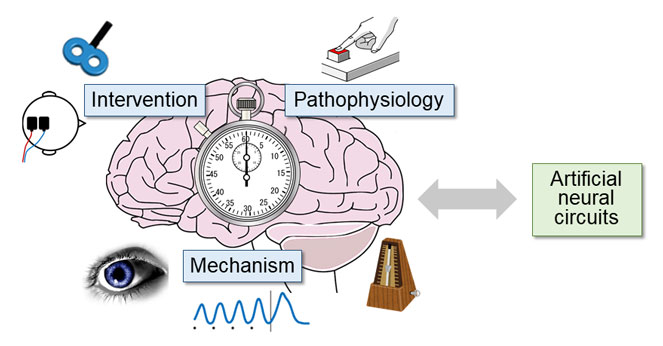 Everyday life is supported by time information. Regardless of our awareness, we often monitor elapsed time, predict event timing, and ride rhythms. However, these abilities are greatly impaired by damages to the brain and are gradually lost during aging. This research team investigates the underlying neural mechanism of temporal information processing that are relevant to perception and action, with emphasis on periodicity and learning. Specifically, we focus on two functions: (1) rhythm perception and synchronized movements, (2) temporal monitoring and time production. Along with exploring the brain mechanism, we also develop techniques to manipulate neuronal activity and aim to understand pathophysiology in neurological diseases. To this end, we have built a multidisciplenary research team with experts in the fields of experimental psychology (Murakami), neurophysiology (Tanaka), clinical neurology (Terao) and information technology and engineering (Amano).

There are many unresolved issues concerning the brain mechanism of rhythm perception and timing. This team will use any available research tools to elucidate them. In addition to exploring the neural representations, we also try to manipulate the network state, which is considered as the neural basis of time perception and other time-related phenomena, by applying periodic perturbation and neurofeedback. We also aim comprehensive understanding of temporal information processing by associating the results obtained in the experiments with the artificial neural circuits that A01 team will conduct. Through these studies, we will contribute to the elucidation of "the mechanism of the mind that creates time".

Ontogeny and Phylogeny of the Acquisition of Time 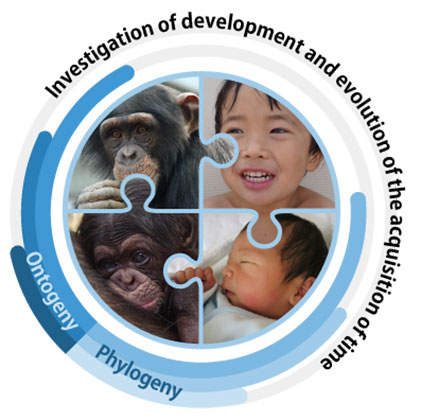 Why does a mind generate time and how is it generated? The present research project aims at clarifying ontogeny, phylogeny, and ultimate mechanisms of the generation of time by conducting a comprehensive research on longitudinal and cross-sectional studies of human development with respect to the understanding about time, comparative studies targeting on apes including chimpanzees and bonobos, the closest living relatives of humans as well as horses and dogs which are phylogenetically distant from humans, and mathematical modelling in order to obtain understanding of time from both developmental and cross-species perspectives. Researchers with different backgrounds, such as comparative cognitive science, developmental psychology, and computational theory, gather together within the framework of the present project in order to conduct inter-disciplinary scientific studies. In addition, by collaborating with other research teams, we will conduct studies to verify developmental changes of time vectors in children's language space, to investigate relationship between time and sociality, to probe cyclic phenomenon at behavioral level, and to investigate clinical disorders of time perception. Expected outcomes would be (1) clarification of developmental changes of time vectors in language space through language corpus study, (2) presence or absence of the link between sociality and time understanding through comparative studies of mental time travel, and (3) verification of the link between theories on learning mechanisms and time viewed from language vectors in language space and predictive activities based on memory.

Generation and Collapse of Time Processing and its Emotional Value

"Mental time" sensed by the brain is different from physical time; it may expand, shrink, and may be segmented depending on internal and environmental states such as attention, motive, and context. Mental time is inappropriately distorted in some diseases. We will clarify how mental time collapses pathologically through neurophysiology (Ikegaya), cognitive neuroscience (Umeda), and clinical neuropsychology (Kawamura). We previously sought the origin of the present, the past, the future and identified the midline region of the cerebral cortex including the anterior part of the precuneus, the retrosplenial cortex, and the medial frontal cortex, the memory-related network including the Papez circuit, and the emotion/evaluation related networks including the orbitofrontal cortex and the amygdala. Driven by these previous findings, we will determine the contours of normal and pathological conditions of brain time function through human clinical studies and animal experiments. We will also tackle daily questions such as "why does fun time passes soon?" and "why is boring time is painful?", which have been difficult to scientifically handle so far. We will extract the fundamental basis for subjective time flow and its value from experimental data using artificial neural networks and machine learning.